NO PURCHASE OR PAYMENT OF ANY KIND IS NECESSARY TO ENTER OR WIN THIS PROMOTION. A PURCHASE WILL NOT INCREASE YOUR CHANCES OF WINNING.

The following rules and regulations are for Penn National Gaming, Inc.’s (“Penn” or “Sponsor”) Facebook mycash promotion series, as it appears at participating casino properties. Penn National Gaming Inc., is the sponsor of this promotion and is headquartered at 825 Berkshire Blvd, Wyomissing, PA, 19335.


ENTRY MECHANISM AND CHOOSING THE WINNERS FOR INDIVIDUAL PROMOTIONS

By entering, entrants acknowledge compliance with these Official Rules individual promotion rules, including all eligibility requirements. To be valid, each entry must follow the directions noted in the rules of each individual promotion and these official rules. The Sponsor is not responsible for lost, late, incomplete, invalid entries, computer error or malfunctions. The Sponsor is not responsible for incorrect or inaccurate transcription of entry information, human, printing or other errors, technical malfunctions, or any other error or malfunction. Automated entries are prohibited, and any use of automated devices will cause disqualification. In the event of a dispute as to any entry, the “authorized mychoice account holder” will be deemed to be the entrant and he/she must comply with these Official Rules.

Sponsor reserves the right to cancel, suspend and/or modify the Promotion, or any part of it, if any fraud, bugs, virus, technical failures, or any other factor beyond Sponsor’s reasonable control impairs the integrity or proper functioning of the Promotion, as determined by Sponsor in its sole discretion. Sponsor is not responsible for computer system, phone line, hardware, software or program malfunctions, or other errors, failures or delays in computer transmissions, the website, or network connections that are human or technical in nature. Sponsor reserves the right, in its sole discretion, to disqualify any individual it finds to be tampering with the entry process, the website, or the operation of the Promotion or to be acting in violation of the Official Rules of this or any other promotion or in an unsportsmanlike or disruptive manner. Any attempt by any person to deliberately undermine the legitimate operation of the Promotion may be a violation of criminal and civil law, and, should such an attempt be made, Sponsor reserves the right to seek damages from any such person to the fullest extent permitted by law. Sponsor’s failure to enforce any term of these Official Rules shall not constitute a waiver of that provision.

Any controversy or claim arising out of or relating to this Promotion shall be settled by binding arbitration in a location determined by the arbitrator as set forth herein (provided that such location is reasonably convenient for claimant), or at such other location as may be mutually agreed upon by the parties, in accordance with the procedural rules for commercial disputes set forth in the Comprehensive Arbitration Rules and Procedures of JAMS (“JAMS Rules and Procedures”) then prevailing, and judgment upon the award rendered by the arbitrator(s) may be entered in any court having jurisdiction thereof. The arbitrator shall be selected pursuant to the JAMS Rules and Procedures. The arbitrator shall apply Pennsylvania law consistent with the Federal Arbitration Act and applicable statutes of limitations, and shall honor claims of privilege recognized at law. In the event that the claimant is able to demonstrate that the costs of arbitration will be prohibitive as compared to the costs of litigation, Sponsor will pay as much of the claimant’s filing and hearing fees in connection with the arbitration as the arbitrator deems necessary to prevent the arbitration from being cost-prohibitive. If any part of this arbitration provision is deemed to be invalid, unenforceable or illegal (other than that claims will not be arbitrated on a class or representative basis), or otherwise conflicts with the rules and procedures established by JAMS, then the balance of this arbitration provision shall remain in effect and shall be construed in accordance with its terms as if the invalid, unenforceable, illegal or conflicting provision were not contained herein. If, however, the portion that is deemed invalid, unenforceable or illegal is that claims will not be arbitrated on a class or representative basis, then the entirety of this arbitration provision shall be null and void, and neither claimant nor Sponsor shall be entitled to arbitrate their dispute. Upon filing a demand for arbitration, all parties to such arbitration shall have the right of discovery, which discovery shall be completed within sixty days after the demand for arbitration is made, unless further extended by agreement of the parties. THE ARBITRATION OF DISPUTES PURSUANT TO THIS PARAGRAPH SHALL BE IN THE ENTRANT’S INDIVIDUAL CAPACITY AND NOT AS A PLAINTIFF OR CLASS MEMBER IN ANY PURPORTED CLASS OR REPRESENTATIVE PROCEEDING. THE ARBITRATOR MAY NOT CONSOLIDATE OR JOIN THE CLAIMS OF OTHER PERSONS OR PARTIES WHO MAY BE SIMILARLY SITUATED. DO NOT ENTER THIS SWEEPSTAKES IF YOU DO NOT AGREE TO HAVE ANY CLAIM OR CONTROVERSY ARBITRATED IN ACCORDANCE WITH THESE OFFICIAL RULES.

BY PARTICIPATING IN THE SWEEPSTAKES, EACH ENTRANT AGREES THAT TO THE EXTENT PERMITTED BY APPLICABLE LAW: (1) ANY AND ALL DISPUTES, CLAIMS AND CAUSES OF ACTION ARISING OUT OF OR CONNECTED WITH THE Promotion, OR ANY PRIZE AWARDED, WILL BE RESOLVED INDIVIDUALLY THROUGH BINDING ARBITRATION AS SET FORTH ABOVE, WITHOUT RESORT TO ANY FORM OF CLASS ACTION AND (2) ENTRANT'S REMEDIES ARE LIMITED TO A CLAIM FOR MONEY DAMAGES (IF ANY) AND ENTRANT IRREVOCABLY WAIVES ANY RIGHT TO SEEK INJUNCTIVE OR EQUITABLE RELIEF. SOME JURISDICTIONS DO NOT ALLOW THE LIMITATIONS OR EXCLUSION OF LIABILITY SET FORTH ABOVE AND IN SECTION 9, SO SUCH LANGUAGE MAY NOT APPLY TO EVERY ENTRANT.

As a condition of entering, entrants agree: (a) under no circumstances will any entrant be permitted to obtain awards for, and entrant hereby knowingly and expressly waives all rights to claim, punitive, incidental, consequential, or any other damages, other than for actual out-of-pocket expenses and/or any rights to have damages multiplied or otherwise increased; (b) all causes of action arising out of or connected with this Promotion, or any prize awarded, shall be resolved individually, without resort to any form of class action; and (c) any and all claims, judgments, and awards shall be limited to actual out-of-pocket costs incurred (if any), excluding attorneys’ fees and court costs.

By accepting a prize, entrants grant permission to use their name, address (city, state, country), any photos, descriptions of their person, likeness, statements, and biographical information without limitation, for advertising and publicity purposes, worldwide in any media known to date or to be developed in the future, without further compensation or notice, except where prohibited by law. The Sponsor, all promotional agencies, prize providers, affiliates, agents and representatives are not responsible for any lost, stolen or otherwise unaccounted-for entries that may arise from technical errors in hardware and software programs.

This Promotion and its Official Rules, excluding any and all disputes, are subject to all applicable US Federal, state, and local laws & regulations. All issues and questions concerning the construction, validity, interpretation and enforceability of the Promotion Official Rules, or the rights and obligations of entrants and Sponsor in connection with the Promotion, shall be governed by, and construed in accordance with, the laws of Pennsylvania U.S.A., without giving effect to the conflict of laws rules thereof, and any matters or proceedings which are not subject to arbitration as set forth in Section 8 of these Official Rules and/or for entering any judgment on an arbitration award, shall take place in the state of Pennsylvania. 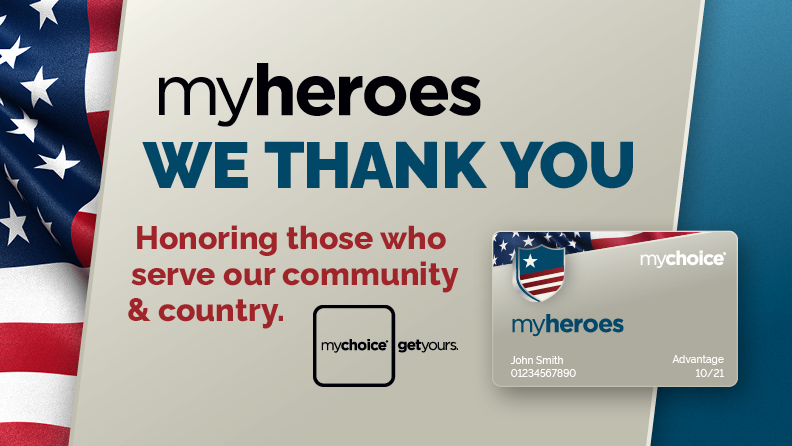 Honoring those who serve our community & country.

Active-duty military, veterans and first responders are eligible for exclusive myheroes benefits, including a tier upgrade to Advantage, up to 30% off hotel rates, dining & shopping discounts and more!